Within two weeks, a young woman and her mom both learned they had breast cancer. Then, they helped each other beat it.

When Barbie Tiemeyer of Fairfield visited her ob/gyn for her annual exam in April 2014, she was still reeling from her daughter Emma's breast-cancer diagnosis just two weeks earlier. "Our world had turned upside down," she recalls.

Then she too got bad news. Like her daughter, she had ductal carcinoma, a type of cancer that begins in the milk ducts of the breast.

"The first thing I thought was, ‘How do I tell my daughter that I have cancer too?'" says Tiemeyer. When she did break the news, she remembers with a wry laugh, Emma's response was quick.

The joke typified this family's gutsy, no-tears approach to dealing with breast cancer's double whammy. Both mother and daughter are happily recovering now and moving ahead with their lives after treatment at Mary Jo Cropper Family Center for Breast Care. They look back together on a shared experience that had a good outcome – but wasn't always easy.

Emma and Barbie's Story: How It Began

Barbie, 52, works for a payroll company; her husband, Rodney, 50, is a warehouse worker. Emma, 32, is single and lives with her parents and her 23-year-old brother, Brian. The family saga began last April when Emma was looking forward to starting a new job as a customer service representative for a local financial services company. She visited her ob/gyn for her yearly checkup, and during the clinical breast exam her doctor detected a lump in her right breast. Emma was sent to a radiologist for a mammogram and a breast ultrasound. The images suggested to the radiologist that the tumor was benign, but a biopsy proved otherwise; Emma was diagnosed with an aggressive form of ductal
carcinoma. It had progressed to stage 2, which means the cancer was growing.

"I was kind of shocked," Emma says. "My aunt was with me when I found out, and I told her, ‘You have to tell everybody.' I was too upset to tell anyone myself."

Barbie was a supportive mom. "The first thing I told her was, don't let it fight you," she says. "You will fight it." But Emma was already in fighting mode. "She told all of us that no one could cry," her mother remembers.

Emma and her doctors met to discuss a plan of action, and they decided that the best course of treatment would begin with chemotherapy, followed by a bilateral mastectomy and then radiation therapy. The double mastectomy was "tough, obviously, but I accepted it, and it was my decision," Emma says. "Especially because I was so young, I worried about getting breast cancer again, and I wanted to do whatever I could to prevent that."

As for Barbie's own diagnosis two weeks later, her ob/gyn had been following a suspicious spot on her mammograms for a year or two. "They thought it was just calcium deposits, but I'd started to feel something right before the exam," she says. The new mammogram raised enough concern that the doctor thought it wise to do a biopsy. When that too came back positive for ductal carcinoma, Barbie at least had the comfort of knowing that her cancer was of a less aggressive type. It was classified stage 1; it remained in situ, which means it was confined to the area where the first abnormal cells began to develop. When cancer is found at this early stage, it can be treated very effectively.

Together, They Decided to Handle Their Breast Cancer Diagnosis with Grace and Humor

Barbie's relief at hearing that, however, was offset by the "blur" of emotions she felt about her daughter's struggle. What she wanted most was be there for Emma. The pair agreed to try to fight their disease together with grace and humor.

"My aunt said she was going to get checked too, and if she had cancer we were all going on Oprah," Emma says. "There was no point getting upset or worrying, so we kept things as lighthearted as possible. I tried to be normal. For the most part, my illness was not interfering with anything I was doing, which was spending time with family and friends." (She did have to turn down that new job, though, to concentrate on her treatments.)

The double diagnoses challenged the whole family. "My husband had it rough," Barbie says. "He'd never had one woman in his life with cancer, and now suddenly both his wife and daughter had it." But she credits him with helping as much as he could, both logistically and emotionally. "And Brian was really good—he took Emma to her chemo appointments," she says. "When you find out someone has cancer, it either makes or breaks the family. This really made us stronger. Never once did either of us say, ‘Why us?' We never lost our faith."

Barbie Wanted to Be Strong for Her Daughter

Barbie and Rodney agreed that they needed to stay strong for their daughter. "It was all about Emma," Barbie says. "We felt we could never let her down. As a mom you tend to put yourself on the back burner; it's the mothering thing. Getting ready for work would be my sad time, but I tried not to show it the rest of the time because of her."

Because her cancer was less aggressive, Barbie elected to have a lumpectomy, in June, followed by 23 doses of radiation. "Everything went well," she says. "I was off work for two weeks after surgery. I got my radiation at lunchtime every day, then went back to work. I was just tired." She now takes a chemotherapy pill every day, which she reports has no side effects. "You would never know by looking at me that I had cancer," she concludes. "I work full time, and have no limits on what I can do."

Emma's story was different because her cancer was more aggressive and had begun to spread. Her treatment began with eight doses of chemotherapy. She claims it was "not as bad as I thought it would be." Her mother says that's putting it courageously. "She was very sick after the first four rounds," Barbie says. "Her blood counts were very low. She lost her hair. After the next four doses she was tired a lot." Yet the family still managed to laugh through the pain. "When she lost her hair, my husband would say, ‘Put a hat on!'" (Emma had tried a wig, but found it hot and itchy and wore it just once.)

"We always made a joke of it," Barbie says. "No sadness, no pity. That's how we got through it."

After the chemo, Emma had her double mastectomy. Again, she refuses to complain. "There were not many problems at all – a little pain for about week is all," she says. "I healed pretty fast." Her radiation treatments, of which there were 32, concluded last December. She will take the cancer-fighting drug herceptin for the rest of this year, and then the tamoxifen for another five years. And at some point she will undergo reconstruction surgery.

Curiously, even though Barbie's mother had died from breast cancer, genetic testing for both Barbie and Emma came back negative. Barbie will continue to see her surgeon every six months and get a new mammogram every time. Both Barbie and Emma have nothing but praise for the care they received at TriHealth. "The doctors were all very good," Barbie says. "They have the best surgeons—you can't even see my scars—and the nurses there are all the best. They make it so personal. They hug you, sit with you, and always make you feel comfortable."

Emma agrees. "You couldn't ask for a better group of people," she says. "They are all so caring. After the first visit the doctors and nurses knew me by name. It was always, ‘Hi Emma, how are you?' You're never just a random patient." Now closer than ever, Barbie and Emma decided to commemorate their health journey with matching tattoos on their wrists. They chose a design that incorporates the phoenix and a lotus, which represents rebirth and overcoming challenges. "That was the one thing she wanted after all this," Barbie says. "She said we could do this because of everything we've overcome together." 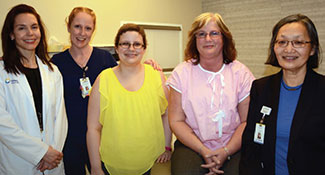 The first, Intrabeam, intra-operative radiation therapy (IORT), for early-stage breast cancer patients, is available in Ohio only at TriHealth Cancer Institute, Cleveland Clinic, and Mount Carmel Health. IORT is a therapeutic radiation option for women with early-stage, low-risk breast cancer. It is administered during a patient's lumpectomy procedure while they are under anesthesia. IORT provides radiation to the lumpectomy cavity while sparing normal, surrounding tissue such as the heart and lung. It is administered in a single dose as compared to the traditional whole- breast radiation therapy approach, which is delivered in daily treatments for five to six weeks.

This radiation treatment option is offered to patients who are eligible for and enroll in the National Registry Protocol through the Trihealth Cancer Institute, says Jess Guarnaschelli MD, a breast cancer radiation oncologist. "To be eligible for this IORT Registry protocol, women must have early-stage breast cancer, small, estrogen-receptor positive tumors and negative surgical margins."

The second advance is called 3-D tomosynthesis. "We were the first in the area to offer it to our screening patients, almost four years ago," says diagnostic radiologist Susan Weinberg MD. In this technology a three-dimensional image of the breast affords the radiologist a clearer picture of any suspicious growths than a standard mammogram. That makes it easier to tell which need further study and which don't, sparing up to 20 percent of women the anxiety of having to be called back for additional testing. It is especially valuable with dense breasts, which are harder to image with traditional mammography, says the doctor, and it's now covered for those women by insurance, thanks to recent legislation.

These are just two examples of the many other radiation and imaging services offered at the Breast Center. "As physicians who are caring for women with breast cancer, we strive to educate women so that they are fully aware of their many options," says Dr. Guarnaschelli.

Time For Your Mammogram: What You Need to Know

3 Things You Should Know about Genetic Testing for Breast Cancer

4 Things Every Woman with Breast Cancer Should Know