Diabetes has become one of the leading chronic diseases affecting Americans today, and the numbers are continuing to skyrocket. Currently, about one in 10 Americans has some form of diabetes, and the Centers for Disease Control and Prevention (CDC) projects that number could rise to one in three by 2050 if the current trend continues.

Diabetes is a challenging and potentially deadly disease for those who live with it. In addition, it puts a massive economic burden on patients and on the healthcare system itself—those affected need a lifetime of expensive care. “I can’t see how our health care system won’t go bankrupt if the CDC’s projections are correct,” says Michael Heile, MD, a primary care physician with TriHealth’s Family Medical Group, who is himself living with type 1 diabetes.

What’s the solution to this growing public health crisis? Giving more people the information and support needed to take preventive steps that will help them avoid getting diabetes in the first place. In addition, technology paired with a greater understanding of the causes of diabetes will enable doctors to help those at risk recognize the warning signs and help those affected control it better. 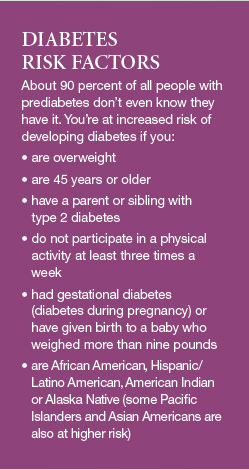 There are two main forms of diabetes: Type 1 accounts for less than 5 percent of cases, and is usually not avoidable. It occurs when the body becomes unable to produce insulin, the hormone that helps process glucose in the body. For many patients, type 1 diabetes can be well controlled with regular insulin treatments.

Type 2 diabetes accounts for the vast majority of diabetes cases. It develops over time, often as a result of lifestyle factors—including poor diet, lack of exercise and obesity—that cause the body to become insulin resistant. With insulin resistance, the body can’t effectively control the levels of glucose in the bloodstream. Over time, that can damage the arteries and lead to a wide range of serious, and potentially deadly, health effects.

Type 2 diabetes is the type responsible for today’s diabetes epidemic because it’s connected with the epidemic of obesity, which stems from sedentary lifestyles and diets high in sugar, carbohydrates and processed foods. “So many conditions occur, or get worse, because of obesity and eating poorly,” Dr. Heile says. “Diabetes is one of biggest examples.”

The good news is that a future in which one in three Americans has type 2 diabetes is not inevitable. Because this widespread condition is the result of lifestyle factors, efforts to change people’s lifestyles can also change the trajectory of the disease.

“We’re creatures of habit and it’s a real challenge to change those habits, but living a low-carb lifestyle and having a regimented exercise program has had a great impact on my sugar levels,” says Don DiGiacomo, who has type 2 diabetes and has being seeing Dr. Heile for the past two years. “The tool I’ve used that has made the biggest difference is an implanted device that provides instant feedback about my blood sugar numbers.”

The availability of and ongoing innovation around continuous glucose monitoring devices will play an important part in wider population health efforts as well. By monitoring patients’ glucose levels in real time, doctors will be able to analyze not only individual patient data, but also the data from entire populations of people with diabetes, providing deep insight into what works and what doesn’t on a large scale.

Widespread collection of health data, and tools to analyze that data, also can help primary care physicians identify people who are pre-diabetic, defined as having higher than normal blood sugar. Identifying at-risk patients allows them to make the necessary lifestyle changes early to avoid getting diabetes and the financial and physical burdens that come with it.

Today, it’s more important than ever for everyone to have regular preventive checkups from their primary care physicians, including regular screenings and blood work for those who may be at risk for diabetes or prediabetes. “The American Diabetes Association says anyone over 40 to 45 should be screened if they’re overweight or have risk factors for diabetes,” Dr. Haile says. “But there are a lot of reasons we may do it even earlier.”

The Best Diets as Ranked by U.S. News, but What is Best for You?