The following article originally appeared in February 2018 on the Cincinnati Moms blog.

When Casey and Todd Gries learned they were expecting, they knew Casey would likely give birth at TriHealth’s Good Samaritan Hospital. Both Casey and Todd have family members in the medical profession who work at Good Sam, so it was natural for Casey to make the TriHealth OB-GYNs her choice for prenatal care. However, about six months into her normal, low-risk pregnancy, Casey and Todd realized their vision of a natural birth would be best served by partnering with the TriHealth Nurse Midwives. Switching from medical doctors to midwives was not a decision they made lightly, but according to Casey, it was one of the best decisions she and Todd made throughout the whole process.

“Every single visit to the TriHealth Nurse Midwives felt like you were going to see someone that really cared about you, your partner and your baby. They have so much respect for the sacred and natural process of birth, and that put us very much at ease,” Casey said. “They also never make you feel rushed. I could come in with a laundry list of questions and know that each one would be met with patience, evidence-based research, and a genuine desire to make sure that our questions were being answered.

“To sum it all up, the midwives made me feel like we were getting the best of both worlds. They fully supported our birth plan, and wanted nothing more than for us to have a natural birth. But, we were still in a state of the art hospital and in the unlikely event of a complication, we would have immediate access to top-notch medical care. It seemed like a no-brainer.”

This personal approach to pregnancy is one of the cornerstones of midwifery philosophy at TriHealth. The midwives concentrate on forming deep bonds with patients and their families, providing extended one-on-one time during visits, personalized birth plans and a more continuous presence during labor.

This personal relationship was evident in Casey’s glowing reviews of the nurse midwives, specifically J. Christy Ganshirt, CNM, MSN. Casey says she was “about the most pleasant human being I have ever met.” She also appreciated that she visited the family right after her daughter Sagan’s birth, and made her feel “warm and fuzzy” at every checkup.

The Wait is Over – Labor Begins

Casey enjoyed an awesome pregnancy free from most complications, and at 40 weeks and 5 days, she and Todd were still awaiting the arrival of their little one. One evening, she felt a small surge of pain, but nothing else, so Casey set out for her usual 1.5-mile hike with the family dog.

Then, about midnight Casey had another surge and was confident labor was beginning. Since Casey remembered hearing in birth class that sleeping during early labor could make the difference between victory and total exhaustion by the time you got to the pushing stage, she and Todd stayed in bed trying to rest as she timed the surges. Finally, at about 4:20 a.m. Casey called her mother to tell her the baby was on the way.

Once Mom arrived, they called the hospital to alert them to Casey’s active labor and request a room with a birthing pool and a natural labor-friendly nurse. While laboring, Casey continued to hydrate. Her hope was to remain at home laboring until she reached 7 centimeters dilation. She found that staying in vigorous motion – including taking the stairs two at a time, repeatedly – helped keep her labor progressing. With the contractions two minutes apart, the trio headed for the hospital.

Arriving at Good Samaritan Hospital: Into the Labor Pool

Upon arriving at Good Samaritan Hospital, Casey was pleased to find that she was 8 centimeters dilated – one better then she had been aiming for. In their room, Todd and Casey got into the labor pool, with Todd gently rubbing Casey’s back. Despite being the hardest and most intense part of her labor prior to pushing, Casey says that one of her favorite parts of the birth experience was being in the labor pool with Todd. She says, “Knowing that he was in there reminded me that we were on the path that we had planned for and that everything would work out in the end.” 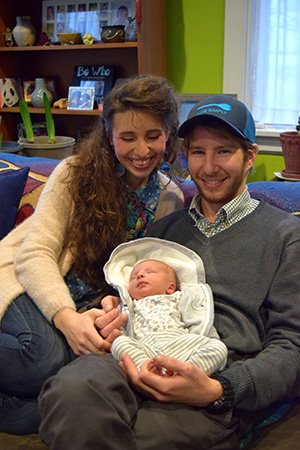 The intensity of Casey’s surges increased as she squatted over the edge of the pool, but didn’t yet come with any urge to push. The delivering midwife checked Casey’s dilation to find that she was about 9.5 centimeters dilated and suggested breaking the water might speed things along.

According to Casey, “I told her that my concern was losing the cushion of the water sac and creating a more intense pressure against my tailbone. She was so patient and open to whatever decision I wanted to make. She explained that we by no means needed to break the water, but that it would likely be another hour or two if I decided not to. That was all I needed to hear. I knew I was getting exhausted and two more hours seemed insurmountable, so I told her to go ahead.

“I was surprised at how much water came out. She told me that there was some meconium in the fluid which made me nervous, because I know that sometimes this can pose a health risk to the baby, and/or alter your birth plan, but Dee stayed very calm. She told me that she wasn’t concerned, and that we would forge ahead. I completed my dilation very quickly after having my sac broken, and took a hands and knees position over the top of the hospital bed. My surges were incredibly strong and close together at this point, and I was wondering if I could really do this. How was I going to get this baby out? One of the things I kept telling myself was to wait for the “ejection reflex” that I had learned about in my hypnobirthing class, and not to push just because I was fully dilated. I wasn’t sure what this was going to feel like, but I soon found out. It was like a sneeze! My body literally started to spasm the baby out. It sort of felt like my body was going to rip itself in two, but at the same time, I could tell that getting the baby out was going to feel so good.”

Finally! The Baby is Born!

As the intensity of the surges and spasms continued to increase, Casey and her birth partners tried several different positions, finally settling with Casey on her side as Todd held her upper leg. The spasmodic pushes increased in intensity until finally, the baby’s head was out. After that, with some twisting and pulling, the body quickly followed.

Casey puts it best saying,” I have never in my whole life felt anything as relieving as that little body sliding out. I had a vivid feeling of being a cat, and knowing that I had just completed a very primal and animalistic act. They put that squishy, wet, bloody baby body on my chest and I was in heaven. Absolute heaven. I had spent so many months worrying about whether or not my baby would be healthy, and praying that labor and delivery would be safe for both of us, and now it was over. Our beautiful baby girl, Sagan, and I were both alive and well, and I was so infinitely grateful to the universe for allowing me to bring her into this world.”

With her beautiful arrival, Todd announced the sex of their little girl along with her name, Sagan Coletta, and cut the umbilical cord. After their experience with the TriHealth Nurse Midwives, Todd and Casey plan to use them for all of their prenatal and delivery needs. As Casey said, “The midwives are stuck with us for life.”

And to her midwife, Casey extends her thanks, “For being such a quiet presence during our birth, and for making it clear that we were in charge and that there was no rush. But most of all, for safely guiding our beautiful girl into the world.”

Aside from delivery services like other health care providers, midwives can prescribe medications, order tests and refer to specialists for care throughout a woman’s life. They also provide breastfeeding support, guidance about newborn care and family-centered medical care that can continue throughout childbirth and past menopause.

The Midwife Philosophy: Care Is A Partnership

4 Advantages of Using a Midwife