The following article originally appeared in February 2018 on the Cincinnati Moms blog.

At 38 weeks pregnant, Ashley McMasters went to bed on September 26, 2016, feeling the strong movements of her baby. When she woke up the next morning, however, “I knew immediately something was wrong. My eyes opened and I knew she was gone.”

Ashley and her husband, Michael, rushed to the hospital where it was confirmed that their daughter, Ellie, was gone. After delivery, doctors determined that Ellie’s death was due to a quadruple nuchal cord (when the cord is wrapped around the baby’s neck) in addition to a true knot in the cord. Cord accidents usually go undetected until it is too late, and in Ellie’s case, Ashley had no warning. She had had a normal ultrasound the week before and Ellie’s movements remained vigorous even the night before. Doctors say that cord accidents, and especially true knots that result in stillbirth, are extremely rare. But it happened to the McMasters family.

Ashley and Michael, along with their then 2-year-old daughter, Anna, set about trying to heal. They put aside thoughts of getting pregnant again until a friend referred them to William T Schnettler, MD, a TriHealth physician who specializes in Maternal-Fetal Medicine. Although they still intended to wait awhile before attempting another pregnancy, Ashley and Michael went for a pre-pregnancy consult with Dr. Schnettler. The doctor’s advice was also to wait between 12-18 months before getting pregnant again, to allow both physical and emotional healing to occur. In the meantime, Dr. Schnettler asked Ashley if they could run some tests. Ashley was completely on board.

“I want everything done that can possibly be done to rule anything out,” she said. And Dr. Schnettler was both thorough and comforting. After receiving Ashley’s normal test results, Ashley and Michael knew they had found the doctor for them. “He had the right amount of professionalism and bedside manner. This is who we want to work with. It is absolutely going to be him.” 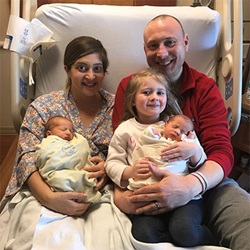 Although they intended to wait longer for Ashley to become pregnant, in May of 2017, Michael and Ashley found themselves back in Dr. Schnettler’s office hearing that wonderful word, “Congratulations!” After the loss of Ellie, the McMasters were understandably nervous, so Dr. Schnettler scheduled an early ultrasound to see the heartbeat. Ashley and Michael went to the appointment terrified, and although they brought daughter Anna along, they did not tell her why they were there.

At the ultrasound, the tech located the heartbeat (JOY!) and then asked Ashley if this was her first scan. Ashley replied that it was. As the ultrasound tech kept asking questions, Ashley was watching the screen. Did she see what she thought she saw? And then the tech asked her, “What do you see there?” Finally, the tech said, “There are TWO babies!”

Daughter Anna summed it up yelling, “Two babies?! How’d you get two babies?!” as Ashley cried and Michael quietly panicked.

And with that, Ashley’s pregnancy became even more high risk.

Thankfully, Ashley’s twin pregnancy progressed normally through the weeks, although with a higher degree of monitoring. Starting at around 28 weeks, Ashley visited the TriHealth offices 2-3 times per week. Since she was understandably nervous about the health of her babies, Ashley requested non-stress testing earlier in the pregnancy than is standard. Non-stress tests monitored the babies for about 20 minutes, tracking their heart rates to make sure all was normal. Even though Dr. Schnettler was not concerned that anything was wrong with the twins, he went ahead and ordered the tests for Ashley’s sake.

“It showed us that my mental state was more important than this test. It was peace of mind. Dr. Schnettler knew that was what I needed throughout this whole pregnancy,” Ashley said.

In keeping with that philosophy, when scheduling Ashley’s delivery, Dr. Schnettler purposefully avoided the 38-week mark (when Ellie was born) and set the delivery for 36 weeks. Ashley and her doctor were planning on a scheduled vaginal delivery. The twins, however, had other plans.

Ashley’s planned vaginal delivery turned into a planned C-section when it was discovered that the twins were breech and showed no signs of moving. With her history, Ashley was not inclined to try turning the babies and so, Dr. Schnettler brought them into the world by C-section. On January 11, 2018, at TriHealth’s  Good Samaritan Hospital, Ashley and Michael’s twins were born two minutes apart. Their son, John Michael, was born at 9:45 a.m., followed by their daughter, Emma Grace, two minutes later at 9:47 a.m.

Both babies were perfect! John weighed in at 6 lbs, 1 oz and Emma at a teensy 4 lbs, 11 ounces. Due to various issues that often pop up with twins, both babies spent some time in the Good Samaritan Hospital Neonatal Intensive Care Unit (NICU). Emma required some additional testing, which lengthened her stay. Being without Emma in their room stirred up many emotions for the McMasters family. Ashley mentioned how thankful she is for the nurses who checked in on her mental state throughout her stay.

“The people that work over at TriHealth are just incredible. Professional, down to earth – they truly care about their patients. I’m not talking about just one or two. The list of doctors and nurses and even the people who brought my food in every day made our stay special and comforting.”

The McMasters and their twins were released from the hospital five days after giving birth. Now that they’re home, Ashley reports that John and Emma are settling in nicely. As of their two-week appointment, both surpassed their birth weights and are “eating, sleeping and even self-soothing.”

How does big sister Anna feel? She thinks the twins are “the greatest in the world.” She was excited from the beginning and she helps with everything. She helps with feeding, changing. She is a great big sister.”

And Ellie is never forgotten. Before the twins were born, the McMasters family raised money to donate a CuddleCot to a local hospital in Ellie’s name. A CuddleCot is an in-room cooling device that allows and encourages parents whose baby is stillborn to spend time with their baby after delivery. It allows families to have extended hours to bond, have pictures taken, plaster molds made and let other family members meet the baby before natural changes that occur in death start to take place.

The donation helped give Ashley and Michael some closure. And the twins have brought the whole family joy.

“It was a big moment when we were able to walk through the doors of our own house as a family.”

Preventing Pregnancy Loss: How Stitches Can Save Babies