From High Risk to High Hopes - One Nurse's Story of Inspiration

Jenna Glardon-Burns, RN knows firsthand how frightening it is to hear words like abnormal, defect, syndrome, preterm labor and preeclampsia. Even as a nurse at Bethesda North Hospital she found herself very scared and overwhelmed when, at 16 weeks pregnant, her unborn son was diagnosed with an abdominal defect.

Two weeks later, he was diagnosed with an omphalocele, a condition in which his bowel and possibly other organs were protruding outside of his abdominal cavity, held in place only by a thin membrane. Suddenly, Jenna was a “high-risk” patient and her care was transferred to Tri-State Maternal-Fetal Medicine Associates at Good Samaritan Hospital.

Under close care from Maternal-Fetal Medicine at Good Samaritan, Jenna endured a pregnancy with multiple complications, including a five-day inpatient stay at the TriHealth Advanced Obstetrical Care Unit at Good Samaritan Hospital before being discharged home on bed rest. Her son, Gabriel, was born at 36 weeks with multiple complications and he required immediate care from the Neonatal Intensive Care Unit (NICU) at Good Samaritan, the largest Level III NICU in the region, before he was transferred to the Cincinnati Fetal Center at Cincinnati Children’s Hospital Medical Center.

“I was amazed at how well the NICU staff worked together to ensure he was OK,” Jenna says. “They even brought him to see me in the recovery room before he was transported. I cannot describe how it feels to not be able to hold your baby. Only being able to touch him through the small holes of the isolette was devastating.”

Gabriel had omphalocele closure surgery at 12 days old and he remained in the hospital for 50 days before being discharged home on Thanksgiving morning 2015. There he was also diagnosed with Beckwith-Wiedemann Syndrome, an overgrowth disorder that puts him at a higher risk of developing cancer. He has undergone four surgeries and multiple tests, but Glardon-Burns says he has come out of each one unphased. 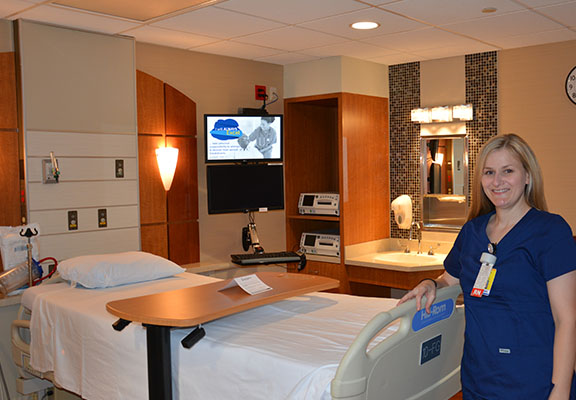 “I decided I really wanted to work there to help inspire other moms and other families,” she says.

The newly named unit is an area reserved for high-risk maternity patients who require longer stays during pregnancy. Multimillion dollar upgrades include modern, state-of-the art technology, better fetal monitoring systems and private rooms for each patient. In addition to the facility upgrades, patients will still receive compassionate care from individuals like Jenna.

“I always tell my patients, ‘There is life after Advanced Obstetrical Care and there is life after NICU,’” she says. “While you are going through it, it can be very lonely and hard to see the light at the end. I try to be that light for them.”