Lance and Our Christmas Miracle: A March of Dimes Story

Lance Carter-Scott Leadon made his grand entrance into the world at TriHealth’s Good Samaritan Hospital on Sept. 7, 2016, five weeks earlier than scheduled. Lance came in weighing five pounds and five ounces, and just like his sister before him, Jasmin, he was born not making a sound but captured the hearts of many.

We found out later that, just like his older sister, Lance’s vocal cords were paralyzed and he would have to undergo tracheostomy surgery. Lance was also born with Congenital Pulmonary Airway Malformation (CPAM), a condition discovered in the womb, resulting in a cyst on his lung. He was monitored during weekly visits to TriHealth’s Tri-State Maternal Fetal Medicine Associates by Dr. William Polzin, who is now retired.

After Lance was born, Lance was transported to the Neonatal Intensive Care Unit at Cincinnati Children’s Hospital Medical Center where he underwent treatment to prevent the cyst from growing too large. Doctors continued to note the similarities between Lance and his older sister’s birth and asked to compare their blood for testing. They soon found that both Jasmin, who was undiagnosed for five years, and her brother, Lance, had a rare condition called Autosomal Recessive Congenital Hypomyelination Peripheral Neuropathy. This condition affects their motoneurons and prohibits natural and fluid movement. The condition is so rare that Jazzy and Lance were noted to be the only children alive in United States with it. 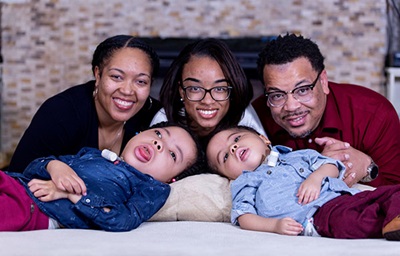 Doctors told us that we have the same misspelling in the same gene and while it was recessive in us, it became dominant in our children. They also told us that most children with this condition only live to be 7 months old. We were then faced with the decision to proceed with surgery to remove the upper lobe of Lance’s lung or to take Lance off of the ventilator and let him pass away. We went back and forth on what to do, realizing that whichever decision we made would be a loving decision for Lance and our family. We finally decided that we believed in God and reserved the right to hope, just as we did with his sister, Jasmin.

A month after his birth, Lance underwent his first surgery at Children’s to have his lung resected and two weeks later, he had his tracheostomy surgery. We spent three months in the hospital with Lance waiting for him to recover, grow and prepare to go home.

As Christmas neared, I was asked by my husband what I wanted for Christmas. I remember getting really still and quiet. I hadn’t thought about it, as the last couple of months had been routine for us—wake up, kiss Jazzy, go to the hospital with Lance, come home and spend time with Jazzy, try to get some sleep in between pumping every three to four hours, wake up and repeat. Finally, I told my husband that all I wanted was for all of our family to be home for Christmas. At the time I said it, I never thought it would come true. While Lance was born larger than his sister at birth, he was still too small to go home on the ventilator and needed to heal properly. So our routine continued.

Christmas Eve, my husband decided to spend the night at the hospital so that he could wake up Christmas morning with our son. Back at the house Christmas morning, my sister, sister in law and I were preparing breakfast for the family. My husband called and asked if I was playing Christmas music on the tv as was tradition in our home. When I told him that I was and that breakfast was almost ready, he told me that he would be home soon and would be ready to eat. Approximately five minutes later, the television started playing different music. I looked up and saw my husband talking on the TV.  He’d made a video about Lance’s journey for us to watch and at the end said, “Merry Christmas.” As the video was ending, he walked in with Lance. He managed to make my only Christmas wish come true! Lance was discharged and was able to join us for Christmas!

Here we are two and a half years later, still believing God for his life, his progress and his healing. Through it all, Lance is a CHAMP. And just like his sister, a miracle and inspiration to many!  We appreciate your support and prayers!