What if you were offered a tool that would lift your spirits, improve thinking and memory, and give you the energy to do all the things you want to do?

The fact is, you already have this tool at your disposal. Numerous medical studies have found that what we eat on a daily basis is powerful “medicine”—perhaps the most powerful—for fighting depression and fatigue and supporting cognitive performance.

Food can actually trigger chemical reactions in our brains that change how we feel and function. Read on for insights and recipes that include brain-boosting ingredients.

Research shows that a higher risk of depression is linked to a diet that includes few fruits and vegetables, but lots of red or processed meat (such as deli meat, bacon and hot dogs), as well as high-fat dairy products like whole milk and butter. Meanwhile, a diet that includes lots of fruits, vegetables, low-fat dairy, whole grains, fish and olive oil is strongly associated with a much lower risk of depression. Certain foods spur the release of the feel-good brain chemicals dopamine and serotonin. This category includes foods rich in the nutrient magnesium, such as leafy greens, nuts, seeds and whole grains; foods rich in B vitamins, including poultry, fish, avocado and almonds; and foods that contain zinc, such as oysters, cashews, liver and egg yolks.

Sugary foods like soda and candy lead to a sharp surge of energy because they trigger the brain to release dopamine. However, this so-called “sugar high” will be brief and will be followed by a slump in mood and energy levels. On the other hand, a well-balanced diet that includes healthy fats, whole grains, lean proteins, fruits and vegetables leads to steady levels of energy.

A recent large-scale study of 28,000 people in 40 different countries found that people who ate the healthiest diets were 24 percent less likely to have a decline in their thinking skills, compared with people who ate the least healthy diets. Other studies have found a connection between a diet high in refined sugars and impaired brain function.

All of these mental benefits come on top of the physical benefits of a healthy diet—joints that don’t ache, fewer colds, better bowel function, lower cholesterol, reduced risk of heart and kidney disease, and much more.

This recipe uses lots of fresh peppers, onions, lime and fish combined with corn or rice and seasonings that provide a little heat, such as the jalapeño used here. 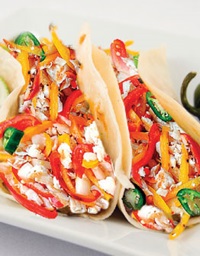 This tasty version of pumpkin soup provides loads of nutrients, including fiber, vitamins A and C, potassium and iron.

Based on a traditional Ethiopian recipe, this hearty dish is packed with nutrients and flavors commonly used in African dishes, including teff, a whole grain with a mild, nutty taste that’s rich in vitamin B6, iron, magnesium and manganese.

Tags Nutrition and Eating , Well Being
Share This Article

Boosting Your Immune System Through Diet and Lifestyle