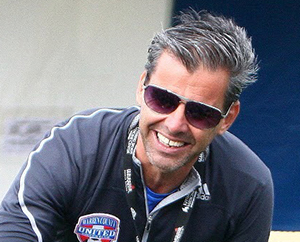 Born in Florianopolis, Brazil, Paulo Barreto showed an immense ability to play soccer at early age. In fact, Paulo showed so much promise that at age 13 he was recruited by a soccer boarding school to develop his skills.

"I had two dreams," recalls Paulo. "I wanted to become a professional soccer player and I wanted to move to America."

Paulo moved away from home to live and breathe soccer until he turned pro at the age of 19. He played professionally in Brazil for five years and one year in Portugal. His professional career lasted a total of six years before a knee injury cut short his career. But Paulo had already made his mark and remains a recognizable figure to some southern Brazilian cities to this day.

With one dream realized, he came to the United States in 1995 while working with the Brazilian Soccer Academy in Raleigh, North Carolina. He relocated to Cincinnati in 1997, where he founded Paulo’s Brazilian Soccer and began training many local teams.

His developmental methods were quickly recognized by the soccer community and the community-at-large, having been featured in both the Cincinnati Enquirer and The New York Times.

As part of his program, Paulo has also taken almost a thousand students and their families to Brazil in order for the students to gain international exposure.

Currently, Paulo works as the club technical director for the Warren County Soccer Club, though Paulo describes it as a Soccer School. He has trained several athletes that have gone on to play for Division 1 colleges and has coached one player who was a part of the Olympic development program. "During training, I emphasize to my students the value of habitual exercise and good nutrition throughout their lives,” he says.

He practices what he preaches as he is exercising at the Pavilion most days of the week. Paulo has been a member since he arrived in Cincinnati in 1997. "My routine involves a lot of cross training. I am very focused on good nutrition as well.” Paulo appreciates the Pavilion's encouraging, positive atmosphere. "Coming to the Pavilion for 18 years confirms to me that I like the place," says Paulo.

Paulo has dual citizenship in Brazil and America in addition to being trilingual, speaking Portuguese, Spanish, and English.