The TriHealth Cancer Institute and the Good Samaritan Skin Cancer Center partnered with Melanoma Know More to provide two skin cancer screenings after providing two in 2019. Melanoma Know More is a Greater Cincinnati organization that strives for a world free of melanoma and is committed to education about the devastating impact of the disease.

The 2019 screenings were held on Saturday April 13, 2019 at TriHealth Cheviot – Skin Cancer Screening Clinic, and Saturday October 12, 2019 at the TriHealth Kenwood – Skin Cancer Screening Clinic. All screenings were open to the community. Volunteers from each organization included dermatologists, nurses, medical students and additional community volunteers.

Dates and times for the 2020 have been selected with more information available from www.melanomaknowmore.com. To schedule an appointment at one of the screenings call 513 853 1449.

American Cancer Society (ACS) publishes that Melanoma can be found early, when it is most likely to be cured. They suggest that of the two best ways: 1) Self-Exam- Know your skin! You should know the pattern of moles, blemishes, freckles, etc. Look for new lesions or changes in existing ones. 2) Exam by a health care professional: During your exam, your primary care doctor finds any unusual moles or other suspicious areas. You may be referred to a Dermatologist for further evaluation. While there is no sure way to prevent melanoma, ACS indicates everyone should also be aware of the risk factors. Some known risk factors are Ultraviolet light exposure (example: Tanning beds and sun lamps), Fair skin, freckling, light hair, family history of Melanoma, personal history of Melanoma, weakened immune system, to name a few.

According to the American Cancer Society (ACS) Website on 11/18/2019 (http://www.cancer.org); it is estimated that Melanoma accounts for only about 1% of skin cancers but causes a large majority of skin cancer deaths. Per ACS, some interesting statistics stated:

The incidence of melanoma at TriHealth, when compared with 1,455 hospitals within the National Cancer Data Base (NCDB) from 2012-2014, shows a higher percentage of early stage melanoma cases. 276 patients were diagnosed with melanoma in 2016. This is the third most frequent cancer site within the TriHealth system. 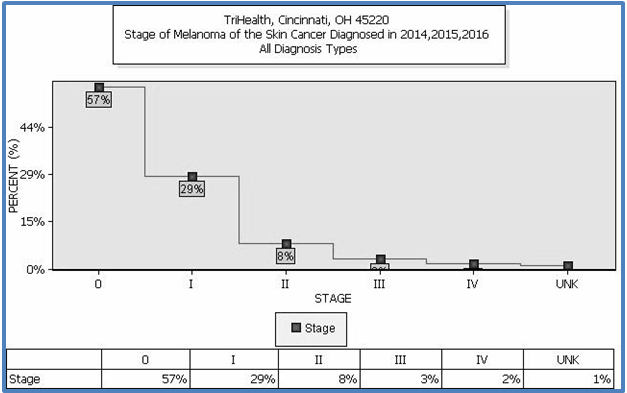 Data below is for a three year period: 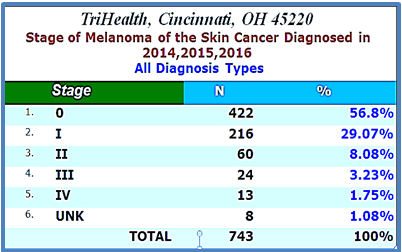 Cancer screenings, Physician exam or Self-Exams play a large role in finding these cancers early. However, management of any cancer diagnosis is referenced to the National Comprehensive Cancer Network (NCCN) Guidelines. The guidelines are established to ensure patient care and treatment including work up and primary treatment. In this example from the NCCN website on 11/19/19 https://www.nccn.org); the guidelines show the work up and primary treatment for stage 0, IA and IB for Melanoma:

The NCCN Guidelines are available for any clinician to guide in providing the best possible care. The guidelines are updated and reviewed on a regular basis to ensure the best cancer care by a team of professionals. The guidelines also provide a follow up recommendations (from the NCCN website 11/19/19): 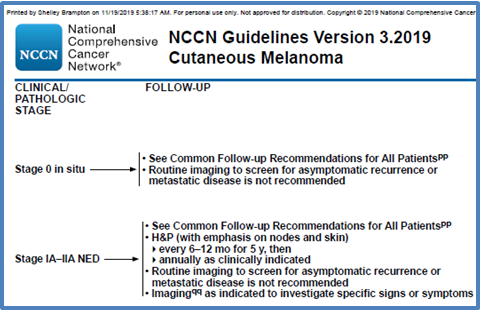 TriHealth physicians also discuss patients in a Multidisciplinary format (MDC) where all specialties can provide feedback on a patient’s treatment plan instead of the patient having several appointments to see each specialty. To show our commitment to patient care, the data continues to show that TriHealth diagnoses the patients in the early stages whenever possible. Our 2017 and 2018 Melanoma data shows:

As our current data for 2017 and 2018 indicates, we continue to screen and diagnose patients at the earliest stages.