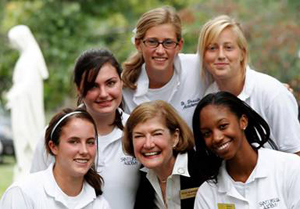 On the day Frances Romweber left her post as principal at St. Ursula Academy to have heart valve surgery, her staff and students didn’t expect her back for weeks, even months. Thirteen days later, when they heard her voice on the PA system announce, “I’m baaack,” they were stunned. How could a 63-year-old undergo heart surgery on a Friday and return to work, full of energy, less than two weeks later?

The da Vinci Surgical System, coupled with an expert medical team made it possible.

Born with mitral valve prolapse, Frances contracted rheumatic fever during childhood, leaving her with a heart murmur. The murmur worsened after the birth of her second child. Later atrial fibrillation set in. When her cardiologist indicated her heart “sounded like a car wash” during a routine echogram, they decided it was time for surgery.

Her cardiologist recommended robotic-assisted surgery to repair her mitral valve. “He’s very knowledgeable about it and felt it was the best process for me.” Working with the da Vinci Surgical System, her medical team performed her heart surgery with just three nickel-size incisions instead of the traditional cracking open of the chest. The result was less trauma, less blood loss, a reduced risk of infection and faster recovery.

“My recovery was seamless. I can’t believe how much more energetic I am as a result of the da Vinci method.” The 715 high schoolers at St. Ursula Academy couldn’t believe it either. Their principal was back on the job in less than two weeks, just in time to remind them of the school dress code prior to an assembly.

One month after the operation Frances had completely resumed all pre-surgery activities, but with renewed vigor and an appreciation for what Good Samaritan Hospital had available to her. “We’re so lucky in Cincinnati. We don’t need to look any farther than our own backyard for advanced surgical techniques like the one I received."