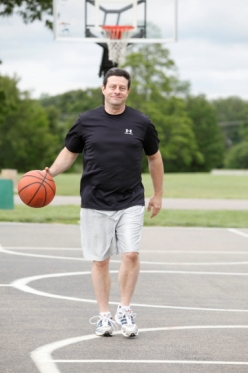 “I was 45, in the middle of Katrina consulting with suppliers and manufacturers for high-level disinfecting products, sucking down coffee and working 20-hour days. Then, my heart kicked out on me, and I had my first ambulance trip,” Jeff Szekely recalls of his initial bout with atrial fibrillation.

He describes a-fib, a fast, irregular heart rhythm, as making him lightheaded, dizzy and very anxious. His second episode occurred about eight months later during a flight from Cincinnati to Baltimore to Ft. Myers, Fla. “The wheels had just come up on the plane when my heart kicked out.” Jeff made it all the way to Ft. Myers airport with a fast, irregular heartbeat before passing out as he walked through the terminal. He was whisked away to the local hospital, and this time he had his heart shocked back into rhythm.

Soon after, his a-fib episodes became a monthly occurrence. “I carried a couple of different medications, but it was taking longer and longer for them to work. At first it was eight to 10 hours and then 20 to 24 hours before my heart would go back into a regular rhythm.

“I’ve had it happen in airplanes, in stores, at sporting events. I started planning my life around ‘what if this happens at the back of the store?’” The triggering event came as he perched atop the stadium stands to watch his son play a varsity football game. After he was assisted down from the stands and off the field, he called his electrophysiologist, Gaurang Ghandi MD, and said he was ready for a procedure to put a stop to the episodes.

Dr. Gandhi recommended radiofrequency ablation, a technique using electrical energy to scar areas around pulmonary veins as they enter the heart. In effect, the scarring stops the short circuiting in this area that most often causes a-fib. For Jeff, it was a simple matter. “I was semi-awake for the procedure. The doctor and I were talking back and forth. I went home the next day and was on the phone with customers the next afternoon. I attended my son’s football game a couple days later.”

Jeff continues, “I’m thrilled with the procedure. Two Bandaids for two or three days and it’s done. I haven’t had one episode since, and I’m back to lifting weights and playing basketball a few times a week. I highly recommend it.”