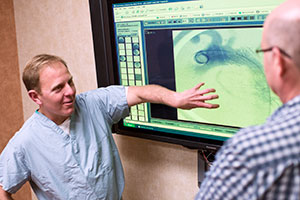 The VISION trial, which represents the first ever guided atherectomy, is scheduled to begin October 2013 at Good Samaritan Hospital. Good Samaritan is one of only 20 centers in the world to participate.

Who Could Benefit from this Trial?

This trial is for patients with peripheral vascular disease (the hardening of arteries in the leg) requiring atherectomy, a procedure used to remove plaque build-up from a blood vessel. The device being tested is a new catheter, the Pantheris catheter, which includes a light that allows surgeons to look inside the vessel and guide the procedure. It is the first lighted catheter available for atherectomy.

Until now, surgeons relied on images taken from outside the body to navigate the artery during a procedure, making it difficult to determine the precise structure of the artery or how much plaque they were removing. The trial is being led by TriHealth Heart Institute surgeon Patrick Muck MD, who is the chief of vascular surgery at Good Samaritan and the program director for the Vascular Fellowship.

How Will the Pantheris Catheter Transform Surgical Artery Procedures?

Atherectomy is one of several options available to doctors for treating plaque build-up in the arteries. “Whenever you have multiple options like that, it usually means that not one is superior,” Dr. Muck tells Cincinnati Magazine.

Whether this innovative device will make atherectomy the standard procedure for treating blockages is unknown. “I think only time will tell, but I have a strong suspicion it will,” Dr. Muck says.

As of now, the device is only being tested for peripheral vascular use; however, “We’ll find, in probably inside of a year or so, this same device will be used on arteries in the heart,” Dr. Muck points out, “which is really exciting.”