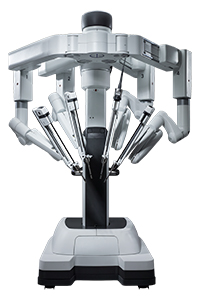 Solidifying TriHealth's position as an area leader in robotic-assisted surgery, the latest da Vinci Xi platform is being utilized at Bethesda North.

Bethesda North is the first adult hospital in Cincinnati with this technology. It utilizes multiple-port access and/or single-site access to allow physicians greater ease in performing the most complex surgical cases.

"This allows us to continue to be on the forefront of robotic surgery," says Mark Delworth MD, medical director of the Minimally Invasive and Robotic Surgery Program at Bethesda North.

"I think that's an important concept. Everybody's got a robot now. Some have two. But our emphasis is on very complex procedures. We don't feel there's any need to go to a Cleveland Clinic or a Johns Hopkins. Almost everything they do, we're doing here."

TriHealth is a leader in performing complex robotic-assisted cases. Bethesda North performs more total da Vinci procedures than any other hospital in our market and is No. 1 in the number of robotic-assisted urology cases.