Corinn Taylor MSN, RN, the TriHealth Working Mother of the Year for 2013, talks about her life as a mother of three and as a case manager at Good Samaritan Hospital.

Working Mother Magazine has selected TriHealth for the ninth time as one of the 100 Best Companies for working moms. And, TriHealth has chosen Corinn Taylor MSN, RN, and mother of three, as our Working Mother of the Year.

TriHealth ranked eleventh on the list out of hundreds of companies nationally who participated in the survey.

“TriHealth understands that our team members have a need to balance their work and family lives, so we are honored that Working Mother Magazine has once again recognized us for our family-friendly programs and policies,” said John Prout, President and CEO of TriHealth. “We listen to and respond to the needs of our staff, and this helps us create an environment of support and collaboration, with a focus on high quality patient care.”

According to Working Mother Magazine, TriHealth scored highly for:

Companies were selected for the 2013 Working Mother 100 Best Companies list based on an extensive application with more than 600 questions on a survey of benefits, women’s issues and advancement, childcare, flexible work arrangements, parental leave and company culture, both in terms of access and usage company-wide. Honored companies will be recognized in an upcoming issue of the magazine, on workingmother.com and at the Work Life Congress in New York City on Oct. 23, 2013.

Our Working Mother of the Year 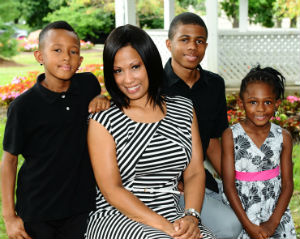 Corinn Taylor, case manager in the Perinatal Programs Department at Good Samaritan Hospital is a working mother who wears many hats. A wife and mother of three children,  she successfully juggles motherhood, a full time job and making contributions to the community.

Corinn was nominated for the award by a co-worker and is being honored for her many personal and professional accomplishments. She will be recognized as TriHealth’s Working Mother of the Year at Working Mother Magazine’s Work Life Congress in New York City on Oct. 23, 2013.

Additionally, she serves on the Executive Board at The University of Cincinnati’s African American Alumni Affiliate and is also a member of the Alpha Kappa Alpha Sorority Inc. Every activity that she has associated herself with has been for the purpose of making positive changes for women, the community and nursing.