TriHealth has announced plans for a new 51,000 square foot expansion on the campus of Bethesda Butler Hospital, located at 3125 Hamilton-Mason Road in Hamilton. The expansion includes a new 45,000 square foot, two-story inpatient building. The hospital, which currently has 10 beds, will have 48 private medical/surgical beds including six new ICU beds upon completion of the expansion.  The new inpatient unit is expected to open in December 2015. 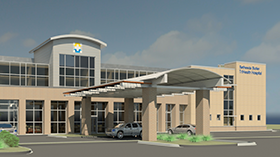 "Excellent medical care is vital to the growth of a community and we are excited about the opportunity to expand Bethesda Butler Hospital again," said John Prout, President and Chief Executive Officer of TriHealth. "We look forward to meeting Butler County's growing need for high quality care."

As part of the project, TriHealth will construct a one-story, 3,000 square foot addition on the south side of the existing surgery/inpatient building to accommodate an operating room expansion. It will also build a 3,300 square foot one-story addition as infill between the existing building and the new two-story addition. Groundbreaking for the expansion will begin in the next few weeks.

Once the project is complete, Bethesda Butler Hospital is expected to add approximately 45-50 jobs, the majority of which will be nursing.

The new beds are needed to accommodate projected in-patient admissions through its 17-bay emergency department (which opened in February, 2013) and an increase in inpatient surgical volumes. As a result of the expansion, the hospital will be able to handle higher acuity inpatient surgical cases.For more information:
Joe Kelley
513 569 6703

"I am pleased that Bethesda Butler Hospital continues to expand with so many additional services to help meet the increasing health care needs in our community," said City of Hamilton Mayor, Pat Moeller.

In addition, this fall TriHealth's Group Health West Chester will open a new 49,000 square-foot medical office building at 8040 Princeton Glendale Road in West Chester. That facility will house a variety of healthcare specialties and services, including family medicine, adult medicine, orthopedics, obstetrics, rheumatology, endocrinology, dermatology, allergy as well as laboratory and a pharmacy. That location will be located just 10 minutes from the Bethesda Butler Hospital campus.