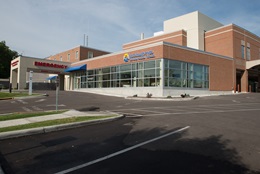 The McCullough-Hyde Memorial Hospital Foundation has exercised its option in the 2015 Affiliation Agreement with TriHealth that requires TriHealth to purchase the remaining 40 percent membership interest in the McCullough-Hyde Memorial Hospital (MHMH), giving the Cincinnati-based health system 100 percent membership interest of MHMH.

“The Foundation believes TriHealth, during the past four and a half years, has fully met its commitment to the Hospital and to the community,” said Alan Oak, Chairman of the MHMH Foundation Board of Trustees. “The challenges in the healthcare industry continue to grow, and the rate of change is accelerating. The Foundation is confident it is the right time to allow TriHealth to assume full membership interest of the Hospital. Taking this action is in the best interest of the residents and the communities in which they live and protects long-term benefits to our patients who rely on the Hospital for their healthcare.”

“TriHealth has been honored to provide care for the people of Oxford and the surrounding communities in Ohio and eastern Indiana, and this agreement demonstrates our long-term commitment to the hospital and its physicians, employees and volunteers,” said Mark C. Clement, President and CEO of TriHealth. “McCullough-Hyde is an important part of TriHealth’s strategy to provide citizens of the tristate region the highest quality care at convenient locations and our mission to improve the health status of the people we serve.”

“The investments over the past several years, combined with the commitments in this latest agreement, position McCullough-Hyde Memorial Hospital for growth and expansion to serve the needs of this growing region,” said Michael Everett, President of MHMH.

In 2015, TriHealth and the Foundation entered into an Affiliation Agreement that provided for TriHealth to have 60 percent membership interest of the McCullough-Hyde Memorial Hospital. The Affiliation enabled the Hospital to fulfill its mission of delivering local, high-quality healthcare while being made stronger by TriHealth’s operations expertise, regional market presence, and financial and clinical resources. Since 2015, TriHealth has made significant enhancements, including expanded clinical specialty services at the Hospital, expansions and upgrades to the emergency department, three new state-of-the-art surgical suites and a new information technology system. During that time period, the Hospital has experienced higher patient satisfaction, higher safety and quality scores, and an improved financial position.

As part of this new agreement, TriHealth has committed to spend an additional $7 million on capital improvements at McCullough-Hyde Memorial Hospital; maintain substantially the same scope of clinical services currently being offered at MHMH; and pay in cash approximately $4 million to the MHMH Foundation which will be used by the Foundation Board of Trustees to further advance its mission, including support of the Hospital.