Rosie and Mr. Redlegs are living better after a trip around TriHealth, the official health care provider for the Cincinnati Reds.

Come see TriHealth on the 3rd base concourse Opening Day and Opening Night for your chance to win prizes, including TriHealth gear. We'll also have a photo station to get your photo taken with Mr. Redlegs and Rosie!

When you need medical attention for yourself or your family, you look for the highest-quality care from a concerned, experienced medical staff. When the Cincinnati Reds needed a health care partner for their fans and team members, they did the same, and turned to TriHealth. Over the years, the partnership has become so successful that it now serves as a model for teams throughout Major League Baseball.

Declan Mullin, vice president of ballpark operations for the Reds, explains that the relationship between the Reds and TriHealth dates back to the days of Riverfront/Cinergy Field.

“TriHealth was providing paramedics, EMTs and doctors on game day, and I quickly found out it was much easier for us to turn it all over to TriHealth,” Mullin says. 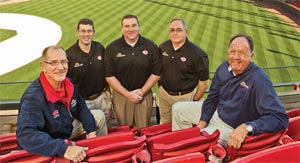 Keeping You Safe at the Games

The TriHealth team is ready to care for any medical problem that might crop up among the 42,000 fans Great American Ball Park can accommodate. It attends to people with heat-related conditions, foul-ball injuries and peanut allergies, as well as less-common problems such as heart attacks and fi reworks injuries.

“Our staff includes critical care paramedics and ER nurses, and we also have a residency-trained emergency medicine doctor and an ambulance at every game,” says Doug Harris, TriHealth’s event program manager, Sports Care and Event Medicine, and liaison to the Reds. “It’s top-of-the-line care.”

The medical services provided to fans include:

TriHealth Doctor Cares for Players, Too

When Reds players report to spring training, one of the first people they see is Stephen Cleves MD, primary care physician to the Reds and at TriHealth Physician Partners Queen City Physicians. Before players step onto the field, they receive a physical by Dr. Cleves, a frequent visitor to spring training, as well as to Great American Ball Park during homestands.

“I have been taking care of Reds players and front office personnel for almost 13 years,” Dr. Cleves says. “And if a player or coach isn’t feeling well at game time, I’ll check in on them before they take the field.”

On game days, or any day, Dr. Cleves is always available to help Reds players with their medical needs.

A Home Run for Employees

“During blood work screenings, TriHealth has caught people who needed immediate medical attention. Had they not gotten to a specialist right away, they might not be here today. Every health fair has saved one or two lives,” Mangas-Coon says.

With TriHealth’s assistance, the health fairs have featured motivational speakers, including Rulon Gardner, a former Olympic wrestler who was also a contestant on The Biggest Loser.

The fairs have been so successful that, after a presentation by Mangas-Coon, several other Major League Baseball teams began similar programs for their team members.

In addition to the health fairs, RedsFit offers free or inexpensive exercise classes such as yoga, tai chi, resistance training and circuit training as well as lunch-and-learn sessions on a variety of topics.

“We try to fill Monday through Friday with an exercise program for a variety of people,” Mangas-Coon says. “We’ve seen people who have never exercised before. We’re seeing an improvement across a wide range of ages.”

The program also offers a clubhouse call twice a month, where a TriHealth doctor comes to see team members for whatever medical need they might have. “Whether they have a sore throat or cold, rash or cough, or want a blood pressure check, the doctor will take care of it,” Mangas-Coon says.

All Reds team members can take part in RedsFit, and Mangas-Coon estimates that 98 percent of team members do so.

“TriHealth is a fabulous partner,” she says. “We wouldn’t have a RedsFit program without TriHealth.”