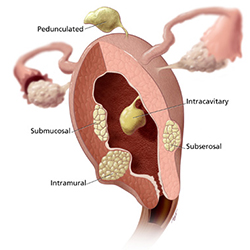 Myomectomy is the surgical removal of fibroid tumors while leaving your uterus in place. Each year, roughly 65,000 myomectomies are performed in the U.S.

After cutting around and removing each uterine fibroid, the surgeon must carefully repair the uterine wall to minimize potential uterine bleeding, infection and scarring. Proper repair is also critical to reducing the risk of uterine rupture during future pregnancies.

During traditional laparoscopy, long-handled surgical instruments are inserted through the incisions. One of the instruments is a laparoscope – a thin, lighted tube with a tiny camera at the end. The camera takes images inside your body and those images are sent to a video monitor which guides surgeons as they operate.

With the da Vinci System, surgeons operate through a few small incisions instead of a large open incision - similar to traditional laparoscopy. The da Vinci System features a magnified 3D high-definition vision system and special wristed instruments that bend and rotate far greater than the human wrist. As a result, da Vinci enables your surgeon to operate with enhanced vision, precision, dexterity and control.

As a result of the da Vinci technology, da Vinci Myomectomy offers the following potential benefits when compared to traditional laparoscopy:

State-of-the-art da Vinci uses the latest in surgical and robotics technologies and is beneficial for performing complex surgery. Your surgeon is 100% in control of the da Vinci System, which translates his or her hand movements into smaller, more precise movements of tiny instruments inside your body. da Vinci – taking surgery beyond the limits of the human hand.

Physicians have used the da Vinci System successfully worldwide in approximately 1.5 million various surgical procedures to date. da Vinci - changing the experience of surgery for people around the world.

Potential risks of any myomectomy procedure include:

In addition to the above risks, there are risks related to minimally invasive surgery, including da Vinci Myomectomy, such as hernia (bulging tissue at incision site) and pulmonary embolism (blocked lung artery).

All surgery presents risk, including da Vinci Surgery. Results, including cosmetic results, may vary. Serious complications may occur may occur in any surgery, up to and including death. Examples of serious and life-threatening complications, which may require hospitalization, include injury to tissues or organs; bleeding; infection, and internal scarring that can cause long-lasting dysfunction or pain. Temporary pain or nerve injury has been linked to the inverted position often used during abdominal and pelvic surgery. Patients should understand that risks of surgery include potential for human error and potential for equipment failure. Risk specific to minimally invasive surgery may include: a longer operative time; the need to convert the procedure to an open approach; or the need for additional or larger incision sites. Converting the procedure to open could mean a longer operative time, long time under anesthesia, and could lead to increased complications. Research suggests that there may be an increased risk of incision-site hernia with single-incision surgery. Patients who bleed easily, have abnormal blood clotting, are pregnant or morbidly obese are typically not candidates for minimally invasive surgery, including da Vinci Surgery. Other surgical approaches are available. Patients should review the risks associated with all surgical approaches. They should talk to their doctors about their surgical experience and to decide if da Vinci is right for them. For more complete information on surgical risks, safety and indications for use, please refer to http://www.davincisurgery.com/da-vinci-surgery/safety-information.php.