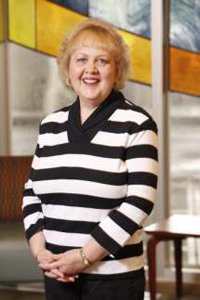 When Kathy Vale suddenly had trouble seeing while driving to the mall last July, she never dreamed the experience would put her on the medical map.

“I thought my eyes were strained from the computer,” she says. Instead she had Myasthenia Gravis, an auto-immune disease that initially caused double vision and eventually severe muscle weakness in her head and neck.

A CT scan showed a tumor on her thymus that needed to be removed. A self-described computer nut since retiring from Procter & Gamble, Kathy got busy and learned that robotic surgery was possible. Her mission was to find someone who could operate robotically. Research led her to J. Michael Smith MD and Karen Gersch MD to do the surgery. Her neurologist wholeheartedly agreed.

Initially surgery was scheduled for January. But when her symptoms became severe, she was hospitalized and the surgery was moved to December. It gave Kathy the distinction of being the first person in the United States to receive a thymectomy via dual robotic surgery. The hospital’s new da Vinci Si enabled the two surgeons to operate on Kathy simultaneously. The technology makes the surgeons’ vision so precise, the results are more efficient and less invasive.

Three days post surgery, Kathy was home. “I never got my prescription for painkillers filled,” she laughs.

Her symptoms now under control, Kathy is grateful for the expertise provided to her. “I feel so fortunate to live in a city with a hospital that has this technology. Without it I would have faced an eight-week recovery,” she says.