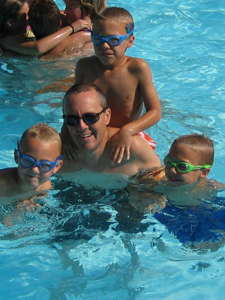 Ken Simpson’s heart was literally pounding out of his chest.

Ken had suffered from a mitral valve prolapse for the past 10 years, which meant that his heart was having a difficult time pumping out blood. The increased strain on his heart was so severe that his cardiologist could hear the pounding of his heart from across the room. However, with minimal symptoms and a fear of open heart surgery risks, Ken had declined surgery when it was previously needed.

Two and a half years later, Ken and his family could no longer ignore his serious health complications. “My wife was afraid I was going to die,” he said. They knew it was time to find someone to save his life.

J. Michael Smith MD and the da Vinci surgical system were able to do just that.

With robotic-assisted surgery, Dr. Smith and his surgical team were able to repair Ken’s mitral valve with a small incision rather than the alternative of open heart surgery. The minimally invasive surgery reduced blood loss and shortened Ken’s recovery time.

Ken went into surgery on a Friday and “felt great” by Monday. He was able to resume most of his normal everyday activities by the following week. Ken looked forward to getting back to working full-time and being able to participate in activities with his wife and six children.

Before the surgery, Ken’s expanded heart was dilated to 6.3 centimeters, well above the normal 3.6 to 5.2 cm range. Two months after Ken’s surgery, his heart returned to 4.4 cm. “When it dropped that much, I was shocked,” he said. “If anybody has any kind of heart problem, I’d tell them to go see Dr. Smith,” Ken said.