You've just been diagnosed with a condition requiring major surgery. You’ve been told your options include:

What if you could have the benefits of a definitive treatment but with the potential for significantly less pain, a shorter hospital stay, faster return to normal daily activities –- as well as the potential for better clinical outcomes?

That’s exactly what robotic surgery offers. It is an effective, minimally invasive alternative to both open surgery and laparoscopy made possible through the use of the daVinci Surgical System.

Through the use of the da Vinci system, surgeons are now able to offer a minimally invasive option for complex surgical procedures. Surgery is performed through 1- to 2- centimeter incisions, even within areas that are difficult to reach with conventional laparoscopy.

The robot’s every move is controlled by a surgeon. Instead of standing over the patient, the surgeon sits at a console in the operating room and looks at a large monitor. This gives the surgeon a few major advantages. First, the operating area can be magnified up to ten times. Second, the image is 3D, providing an incredibly accurate field of vision.

While seated at the console, the surgeon’s fingers grasp the master controls. Surgical instruments attached to robotic arms translate the surgeon’s hand, wrist and finger movements into precise, real-time movements.

The small, precise instruments allow delicate cutting and stitching not possible through other minimally invasive techniques. Increasing the precision, the robot automatically removes the natural tremor of the surgeon and improves the doctors’ control. 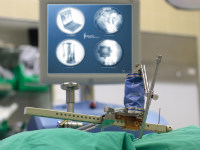 Robotic surgical technology can help treat patients suffering from chronic, debilitating back pain or limited range of motion caused by spinal deformities and degenerative conditions such as slipped vertebrae, scoliosis, and pinched nerves. Surgeons use robotics in procedures including spinal fusion, vertebroplasty and biopsies.

A system called SpineAssist allows TriHealth surgeons to create a three-dimensional simulation of the patient's spine on a personal computer to plan exactly where to make incisions and place implants. During surgery, a robotic device guides the surgeon to the precise, pre-determined locations on the spine.

What is robotic surgery?

Robotic surgery is a method of surgery based on minimally invasive or laparoscopic surgery. It addresses the limitations of minimally invasive surgery (MIS) and improves surgical execution and patient outcomes. By dramatically enhancing visualization, precision, control and dexterity, robotic technology overcomes the limitations of traditional MIS or laparoscopic technology, helping physicians to perform complex surgery in a manner never before experienced.

What is the name of the equipment used in robotic surgeries?

Surgeons at TriHealth hospitals utilize the da Vinci Surgical System for robotic-assisted procedures. Made by Intuitive Surgical, the da Vinci surgical systems provide physicians with such enhanced detail and precision that they can simulate an open surgical environment while allowing operation through tiny incisions.

Does a robot actually perform the operation?

No, although the general term “robotic surgery” sometimes is used to refer to this technology. Devices for robotic surgery are designed to perform entirely autonomous movements after being programmed by a surgeon. The da Vinci Surgical System cannot be programmed or make decisions on its own.

What are the benefits for surgeons who perform robotic-assisted surgery?

Some of the major benefits experienced by surgeons using the da Vinci Surgical System over traditional approaches have been greater surgical precision, increased range of motion, improved dexterity, enhanced visualization and improved access.

No. Robotic surgery enables surgeons to be more precise, advancing their technique and enhancing their capability in performing complex minimally invasive surgery. The da Vinci Surgical System replicates the surgeon’s movements in real time and cannot function without the surgeon’s input.

How does the surgeon control the da Vinci Surgical System?

The surgeon operates while seated at a console and sees true-to-life three-dimensional images of the operative field. The surgeon’s fingers grasp the master controls below the display, with hands and wrists naturally positioned relative to his or her eyes. The surgeon’s commands are executed via the patient-side cart, where four robotic arms and specially designed instruments translate the surgeon’s hand, wrist and finger movements into real-time movements inside the patient.

What happens if there is a complication during a robotic-assisted surgery?

Though chances of this occurring are slim, if the da Vinci Surgical System mechanically fails during surgery or the procedure becomes too difficult to perform robotically, surgeons can easily transition to and complete the procedure with either conventional laparoscopic or open surgery.