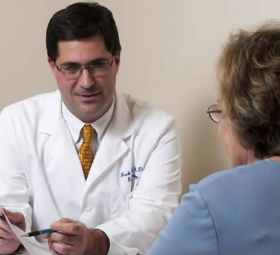 The physicians at the Good Samaritan Women’s Center for Specialized Care and Tristate Gynecologic Oncology regularly treat these conditions:

In its early stages, cervical cancer may have no symptoms. As it progresses, signs include:

Contact your doctor if you have any of these symptoms. Regular screenings are recommended beginning at age 21, or sooner if you are sexually active. During the screening your doctor will look for precancerousDr. Basil cells or changes in your cervix. If changes are found, you'll undergo testing to determine if you have cervical cancer. Your doctor will recommend a treatment plan based on test results.

This cancer usually occurs in women over age 50, but it also can affect younger women. The most common symptoms are:

Ovarian cancer often causes no symptoms until in advanced stages. When symptoms do appear, they tend to worsen gradually. If you have one or more of the symptoms listed above for no obvious reason, contact your doctor. Early detection increases your chances for survival. Surgery is the primary treatment.

This is the most common cancer to affect a woman's reproductive tract. It begins in the lining of the uterus. It is most often (but not exclusively) found in women who no longer have periods. The most common symptoms are:

Contact your doctor if you have any of these symptoms. Tests can be performed to determine if you have this type of cancer. Because uterine/endometrial cancer usually is detected early, it often can be cured with surgery to remove the uterus.

Less than 1 percent of gynecologic cancers are vaginal. It is most common in women older than 60. In its earliest stages you may have no symptoms. When symptoms do occur they include:

See your doctor if you have some or all of these symptoms. If found early, vaginal cancer can be cured.

Between 2 and 4 percent of all female cancers are vulvar cancer. It is a cancer on the outside of the genitals. It develops slowly, over years, and often is found during routine exams.

Vulvar cancer can be present long before symptoms appear. Symptoms may include:

See your doctor if you have any of these symptoms. Treatment depends on your overall health and on how far the cancer has progressed.