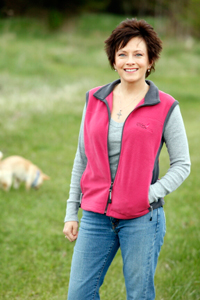 Anita White is not a surgeon. But life threw her some unexpected twists and turns. And before she knew it, Anita learned more about surgical procedures than she ever imagined.

First she had a mastectomy. Reconstructive breast surgery was next. Five days later was an emergency appendectomy. Then more reconstructive surgery.

So when Anita’s doctor, Jon Fackler MD found a cyst and recommended a hysterectomy, Anita was understandably shaken. “I had been through enough. I didn’t think I could muster the strength to undergo another surgery,” she says.

But this surgery would be different. “The nurse called. They wanted to use a da Vinci robot to perform my hysterectomy.” Before consenting, Anita did some research. She learned that robotic-assisted surgery is less invasive, and the recovery period much faster, than other surgery methods. Although nervous, Anita agreed to the robot.

The following Friday Anita walked into Bethesda North Hospital for her 8:30 a.m. procedure. By 4 p.m. the same day she was back home. By the next afternoon she was back to walking the wooded trails behind her Lebanon home.

“I’ve had dental work that was worse than my hysterectomy,” she laughs. Four tiny incisions was all it took to remove her uterus, ovaries and fallopian tubes. “Dr. Fackler used glue to close the incisions,” says Anita. “No stitches!” She had to remind herself to take pain killers. “I forced myself to take it easy for a few days. It really was amazing.”

Within two weeks of the surgery, Anita was back to walking four miles a day, and to driving her second grader, Elizabeth, to and from school. “I feel incredible,” she reports, “but at the same time, I’m hoping there are no more surgeries in my future!”