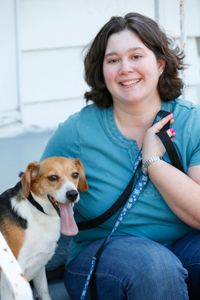 With a two-and-a-half year old daughter, Dawn Webb didn’t have time to be bedridden following surgery. But she needed a hysterectomy. “I had fibroid issues that were getting worse, so something needed to be done,” says Dawn, 33.

Her doctor recommended what sounded like the perfect solution. “He suggested a supracervical hysterectomy to remove the uterus but save the ovaries. It would prevent me from early menopause,” she said. “And best of all, he wanted to use the daVinci.” By using the robot, Dawn’s procedure was minimally invasive with a quick recovery and minor scaring.

On the day of her procedure, Dawn arrived at Good Samaritan at 5 a.m., had surgery at 7:30 a.m., and was home by 2:30 p.m. “Afterwards, I was a little loopy from the pain medicine and very hungry. But I really didn’t have any pain,” she remembers. Not a fan of pills, Dawn allowed herself one painkiller that night, another the following day, then no more. She recalls “just a little tenderness near the incision. It really wasn’t even all that uncomfortable!”

Dawn was back to doing dishes the day after surgery, and a week later, with her doctor’s permission, she was in the pool while her daughter had swim lessons. “I had a C-section when Keira was born. This was a piece of cake compared to that!”

Eight days after surgery Dawn returned to her fulltime job as a chemist. She also resumed her nightly routine—a one-and-a-half mile walk with Keira and dogs Morgan and Larry.

Dawn’s quick recovery had just one downside. “When I jokingly told my husband I couldn’t do laundry for three weeks, he didn’t buy it!”