How Event Medicine Works at TriHealth

TriHealth Event Medicine program was started in 1997 when TriHealth became the official healthcare partner of the Cincinnati Reds. When TriHealth partnered with Xavier in 1999, a comprehensive system of medical care was developed.

Critical to the success of both of these relationships was the development of a program which could provide onsite emergency medical care to not only team members but to spectators as well. Building on the success of these two programs TriHealth Event Medicine has partnered with multiple high profile organizations.

How We Do It 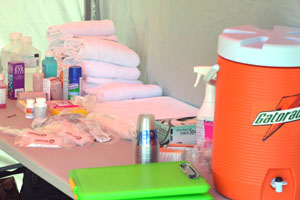 From blisters or minor skin laceration to more serious medical issues, like dehydration or cardiac arrest, the team staffing these events treats health issues of all types and severities. “We’re representing TriHealth as a one-person emergency room,” says Mike Boeckermann, a long-tenured paramedic.

Then, there’s the concierge part of this program. In more severe cases, for example, if someone is experiencing a heart attack, the team stabilizes the individual and then transports him or her to the closest TriHealth facility equipped to handle it. “We facilitate their entry into our system immediately.” Doug points out. “We’ve really got the best of the best covering this stuff.”

Bunbury, which started in 2012, is an alternative music festival, featuring several live performances (this year they had 80) across six stages throughout Sawyer Point and Yeatman’s Cove. TriHealth Event Medicine provided two medical tents, supported by paramedics, an advanced life support (ALS) squad and emergency medicine nurses, to offer medical care for spectators during the three-day event. Additionally, one emergency medicine doctor was onsite in case any of the entertainers needed medical intervention.

Protecting Fans When They Need it Most 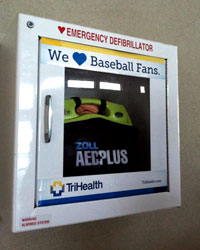 If you ever attend a Reds game at Great American Ball Park or a Xavier University sporting event at the Cintas Center, a TriHealth medical team member is nearby. Fan care is at the core of our event medicine coverage. At Great American, patrons can expect:

This model is mirrored at the Cintas center, with a few variations to accommodate for the venue differences.

Reds team members benefit from these services, too, through the annual RedsFit and TriHealth Wellness Event, which includes several TriHealth physicians and team members who host interactive booths, like EKG, physical therapy, acupuncture and blood draws, among others.