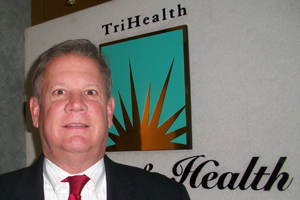 “The best way to stay in shape is to never get out of shape.”

This is a motto authored by Bob Schnedl who has been a loyal member of TriHealth for over 12 years.

Bob has been known to work out twice a day. In the morning, he has a routine consisting of running, stretching and weight lifting.  He frequently attends Diane Kelly’s Total Body Conditioning Class at 5:45 AM. Often, Bob returns after work for a quick work-out or attend Yoga class on Monday evening. Exercising after work is a perfect formula to reduce stress.

Bob’s favorite hobbies include tennis, bicycling and until recently water-skiing.  On June 30, 2011, Bob was severely injured waterskiing at the family cottage in Traverse City, Michigan.  Two hamstrings were completely torn off his right leg at the hip.

After two days in the hospital, a blood clot developed in his leg. In bed, harnessed in a wheelchair and using crutches for over 3 weeks changed his outlook on life.  Bob decided against surgery. Over the next six months, three different physical therapists taught Bob the benefits of stretching and how to stretch properly.   Bob spends twenty minutes stretching every day.

Why does Bob belong to TriHealth? “TriHealth Pavilion members are successful individuals who take health issues seriously and love to talk sports."