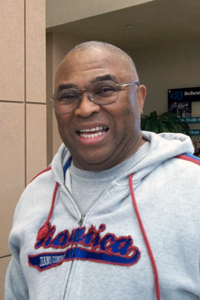 “The man who can drive himself further once the effort gets painful is the man who will win.”   Roger Bannister  - Athlete

For the last 10 months, Marty Polk, our December Member of the Month, has been living by those words daily.

Marty and his wife Marsha have been members of the TriHealth Fitness and Health Pavilion since 2007.  They having been coming to the Pavilion to work out and have some fun at the same time.  On January 18 of this year, Marty suffered a severe stroke that put him in the hospital for 48 days.  During that time, Marty three close calls, and his family believed he would never come home again. He lost the use of his entire right side of his body, and spent many hours a day while in the hospital doing occupational, physical, speech and recreational therapy.

When it was time for Marty to return home, he was in a wheelchair and still had a lot of therapy ahead of him.  His doctors referred him to the Physical Rehabilitation Outpatient Services (PROS) area in the Pavilion for more rehabilitation, where he worked with Jody, Dave and the other PROS staff.   He continued to improve physically, and was able to re-learn normal activities like doing laundry and driving.  While in PROS, Marty moved from the wheelchair, to a walker, then to a cane.

When he completed PROS, Marty and Marsha were not ready to stop.  They wanted the old Marty back completely, so they continued on to the next step, and began the post- rehab sessions with Karen Sims, ATC at the Pavilion.  Karen has been working with Marty two days a week, helping him get stronger, with strength training and aquatherapy.  Now Marty is walking two miles on the track upstairs, without a cane, and doing some of his normal exercises from before the stroke.   To talk to him now, you would never know what he had gone through this year.

“Marty was the model patient for rehab, and all the doctors and the therapist were stunned by his miraculous recovery and his drive to get better”, said Marsha.  “He had such determination; he wasn’t going to give up until he did get it right.  Even when he wasn’t in therapy, he was walking the halls of the hospital, because he wanted to get better.”

Marty was a Cincinnati Police Officer for 30 years, and retired in July of 2011, just 6 months before his stroke.  He was an All State high school football star where he played for Lockland High School.  The discipline he used in his work, and sports, is the same discipline he used during the last 10 months.  He has worked so hard and is still doing that.  His positive attitude kept him from ever giving up.

Marty and Marsha have two adult sons, Martin and Michael.  Marty and his sons never miss Black Friday shopping together, as it is one of their family traditions.   And, because he was walking well, without help, he didn’t have to miss this tradition this year.   Marty is also a huge football fan, with season tickets to both the Bengals and UC.  He also never misses a Notre Dame or Ohio State game on TV.

What is next for Marty?  He says, “getting back to 100% with a routine fitness schedule, eating healthy, staying positive, and continuing to enjoy life”.